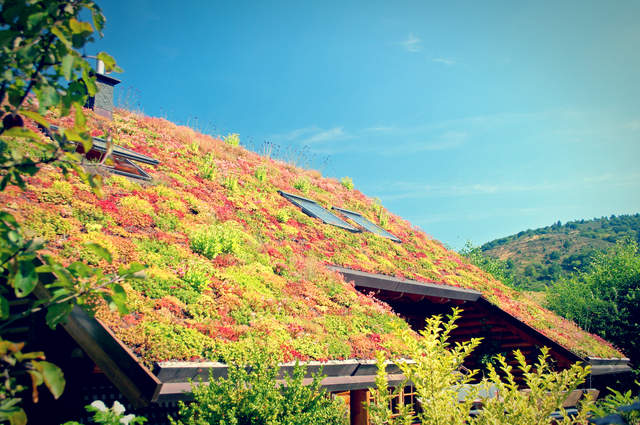 A Green Roof, similar to the kind that will be used on a proposed Motorway Services Area in the North East of England. Image by Shutternelke (via Shutterstock).

The Motorway Services Area: both a help and a hinderance in equal measure. For rest and recuperation, good for a quick drink. Not so good if you’re on a budget and begrudge paying next to millions for a cup of coffee. Green spaces (or anything of an environmentally friendly nature) seldom feature in the same sentence as Motorway Services. A new services for the A1(M) that has been given the go ahead will have a green roof.

The new motorway services, operated by Applegreen, will be situated near Kirby Hill, which is north of Boroughbridge. Applegreen are the largest operator of Motorway Service Areas in the Republic of Ireland and have yet to get a foothold in England. There has been previous plans to add similar facilities on Kirby Hill, which have been rejected every time.

The new plans, with the green roof being its main feature, aims to reduce the visibility of the services from great distance. In other words, Applegreen’s design will blend in with its immediate surroundings. Once approved, the new services will bring 300 jobs to the area. To avoid encroaching on the village, its 383 space car park will be situated off the northbound side of the A1(M) motorway.

Kirby Hill services isn’t going to be the first UK motorway services to have a green roof. This honour belongs to the Gloucester Motorway Services Area which opened in 2014 and 2015. Situated off the M5 motorway between Junctions 12 and 11A, it is operated by the same people as Tebay services on the M6 in Cumbria. The green roof complements its dry stone walls and provides a rural setting for savouring artisanal food.